In 2007, the Partnership for the Delaware Estuary (PDE) launched the Freshwater Mussel Recovery Program which aims to conserve and restore native freshwater mussels in the Delaware Estuary. The mussel recovery program is part of PDE’s watershed-based shellfish restoration strategy which includes projects from headwaters to the Bay. Other example projects include: oyster reef restoration, marsh mussel living shorelines, and PDE’s 2011 marine shellfish priorities report. 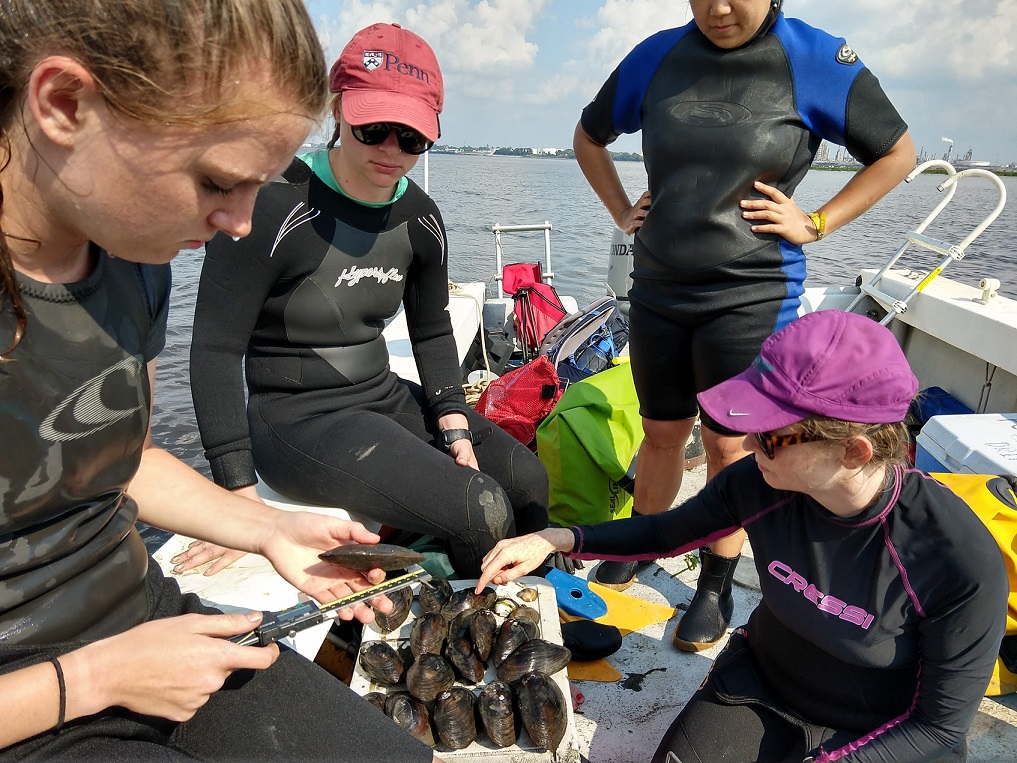 PDE leads scientific surveys to determine the status of freshwater mussel populations throughout the estuary. Qualitative and quantitative surveys provide critical information on the range and quality of mussel populations under the current natural environment. This information is exceptionally useful since the last comprehensive survey of freshwater mussels in Pennsylvania, for example, was performed over one century ago! When paired with historical records, current surveys help scientists and resource managers understand where mussels continue to thrive and where populations may be at risk.

Within the tidal Delaware River, PDE and partners had discovered up to seven native species in healthy mussel beds between Trenton and Philadelphia. Included were two species that had been believed to be locally extinct, and several other species found were state listed as rare, threatened or endangered. These types of observations are encouraging and offer hope that these species may eventually repopulate streams from which they have been lost. By working alongside many partners including the states of New Jersey, Pennsylvania, and Delaware, PDE puts an estuary-wide emphasis on mussel surveys. 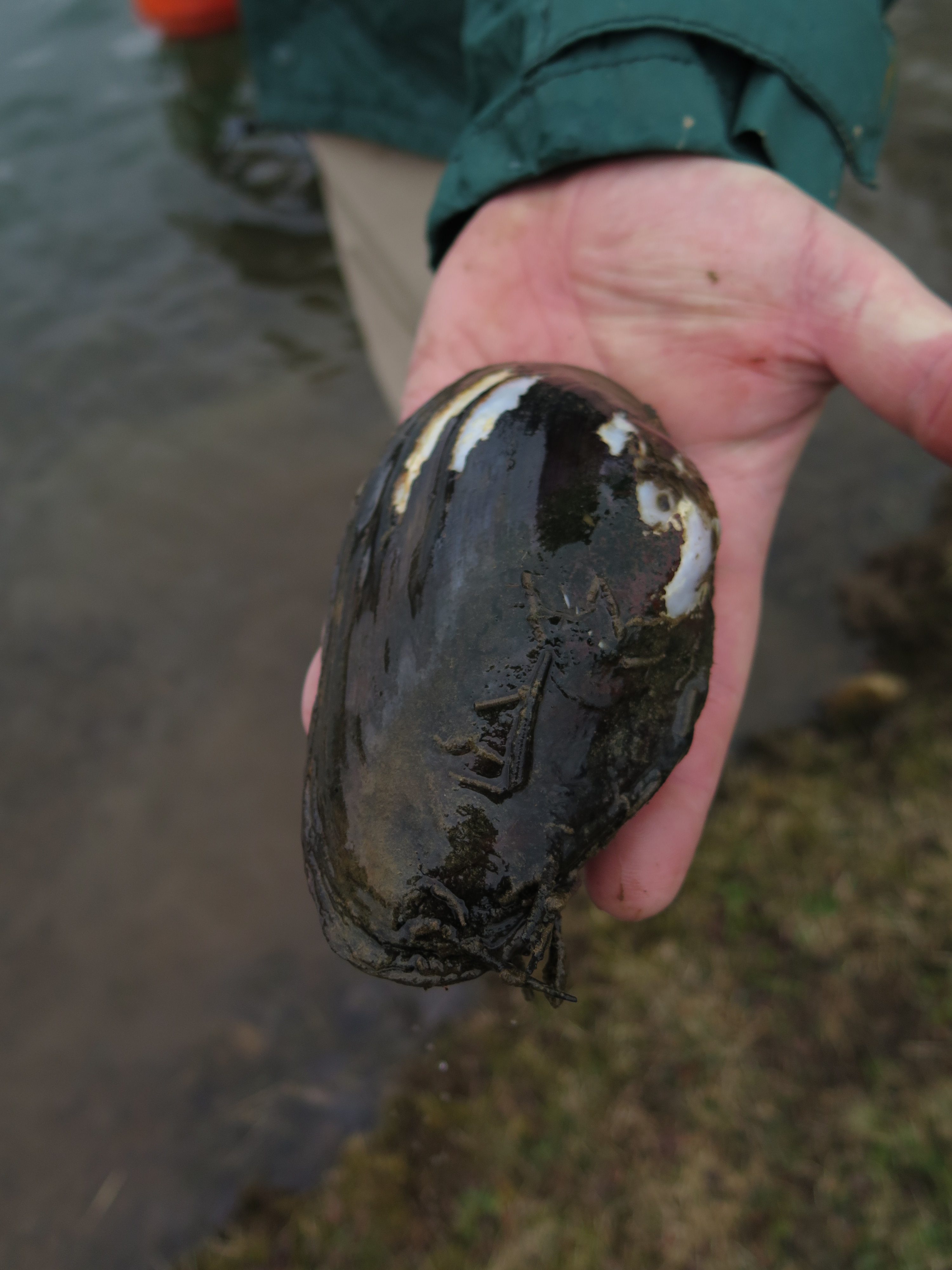 The habitat requirements of freshwater mussels vary by species; however, some universal needs are stream bottom stability, adequate water flow, as well as contaminant-free waters. Streams and rivers that are subject to flashy flows (e.g. severe flooding and stormwater runoff), unstable stream bottoms, low water levels, and high amounts of contaminants will be unable to support healthy mussel populations. This presents an opportunity to expand the carrying capacity for native mussels by enhancing habitat and water quality conditions. For example, PDE is working to design living shorelines that include suitable substrates for mussels within a coastal “habitat mosaic.” Projects that stabilize streambanks, stabilize stream bottoms, remove dams, restore forests along stream sides, and restore underwater vegetation also benefit mussels. Since mussels are very sensitive to certain contaminants (e.g. ammonium), efforts to detoxify the water and stream bottom are critical. PDE seeks to work with partners to define Habitat Suitability Indices and other metrics to help guide habitat-associated restoration (and mitigation). 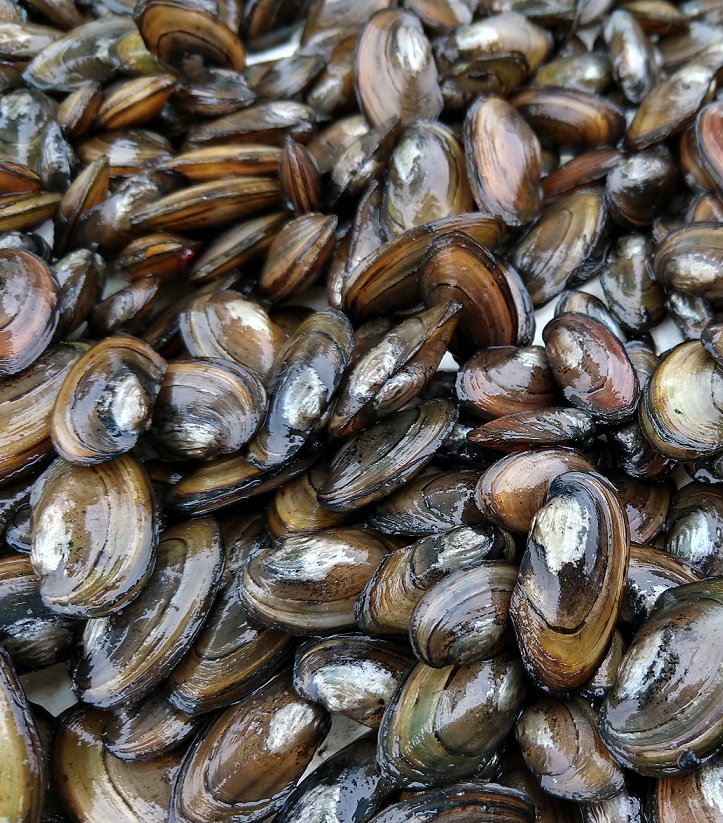 Nearly 300 species of freshwater mussels are native to North America and 70% of those species are listed as endangered, threatened, or of special concern (Williams et al. 1993) making them one of the most imperiled aquatic animal groups (Nobles and Zhang 2011). Similarly, the 13 historically native species in the Delaware River Basin appear to be in decline due to many potential factors including degraded or altered habitat, decreased water quality, decreased forested riverbanks, lack of suitable fish hosts, stormwater, dams, or altered water flow (PDE 2012a, 2012b). PDE recognizes that every mussel is precious and it is vitally important that mussel populations that are stressed be identified and protected, especially in cases where federal or state-listed imperiled species are present. To protect these mussel beds, managers must be equipped with species-habitat maps to prioritize areas for conservation and consider possible designation of Critical Habitat for protection. 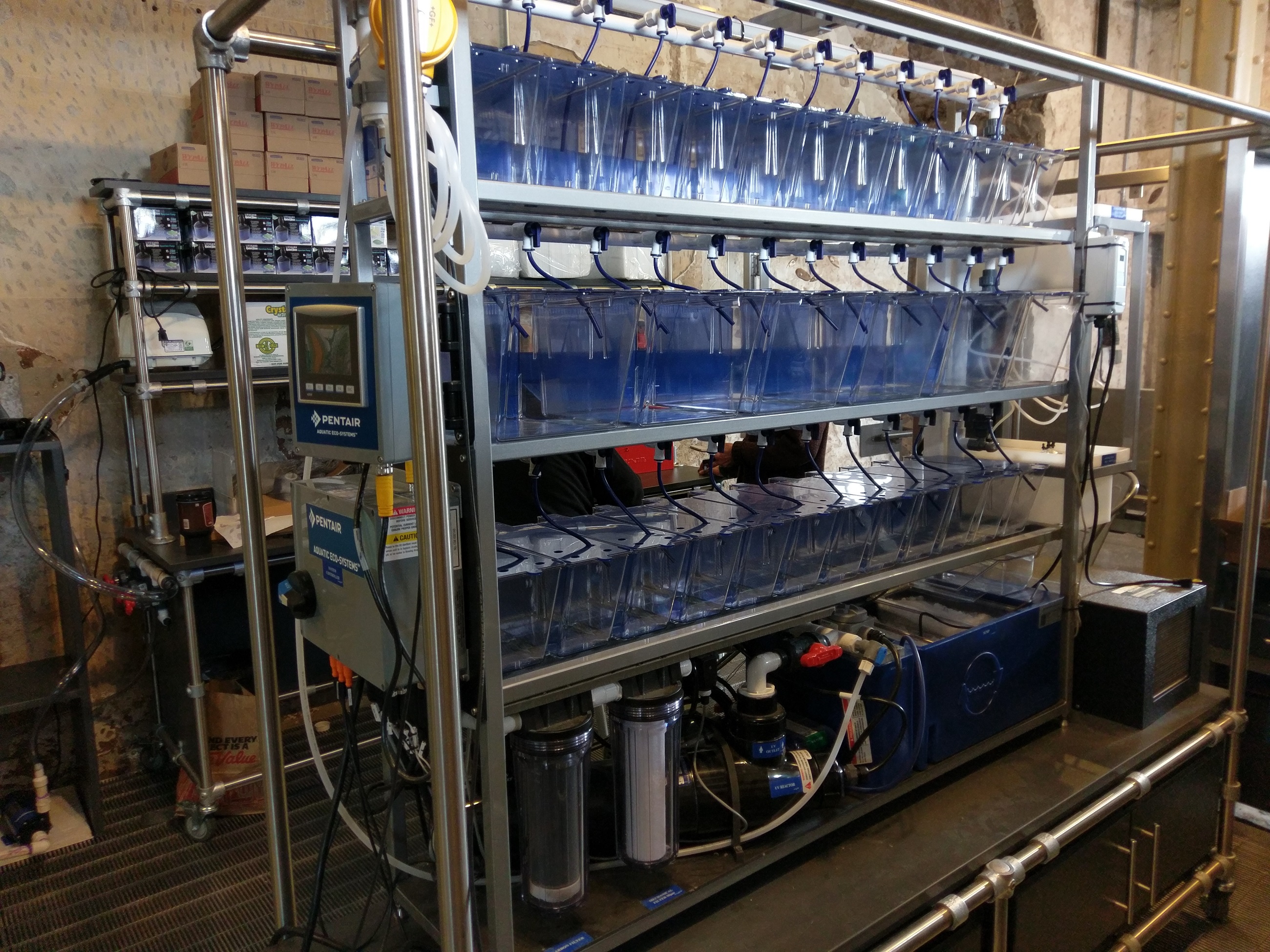 Propagation is a very powerful tool where new baby mussels are spawned by pairing adult mussels and their fish hosts in a mussel hatchery. Female mussels are fertilized naturally in the environment and are then collected by scientist and taken into a hatchery. Scientists take the mature larvae from the female and place them in the same water as their fish hosts. Larvae attach to fish gills for a few weeks and then transform (like a butterfly from a cocoon) into a baby mussel!

PDE developed local propagation tactics with a variety of local, state, and federal partners and is expanding efforts with a production hatchery in Philadelphia (see MuCWI page for more information). A freshwater mussel exhibit hatchery was built at the Philadelphia Water Department’s Fairmount Water Works in 2017. 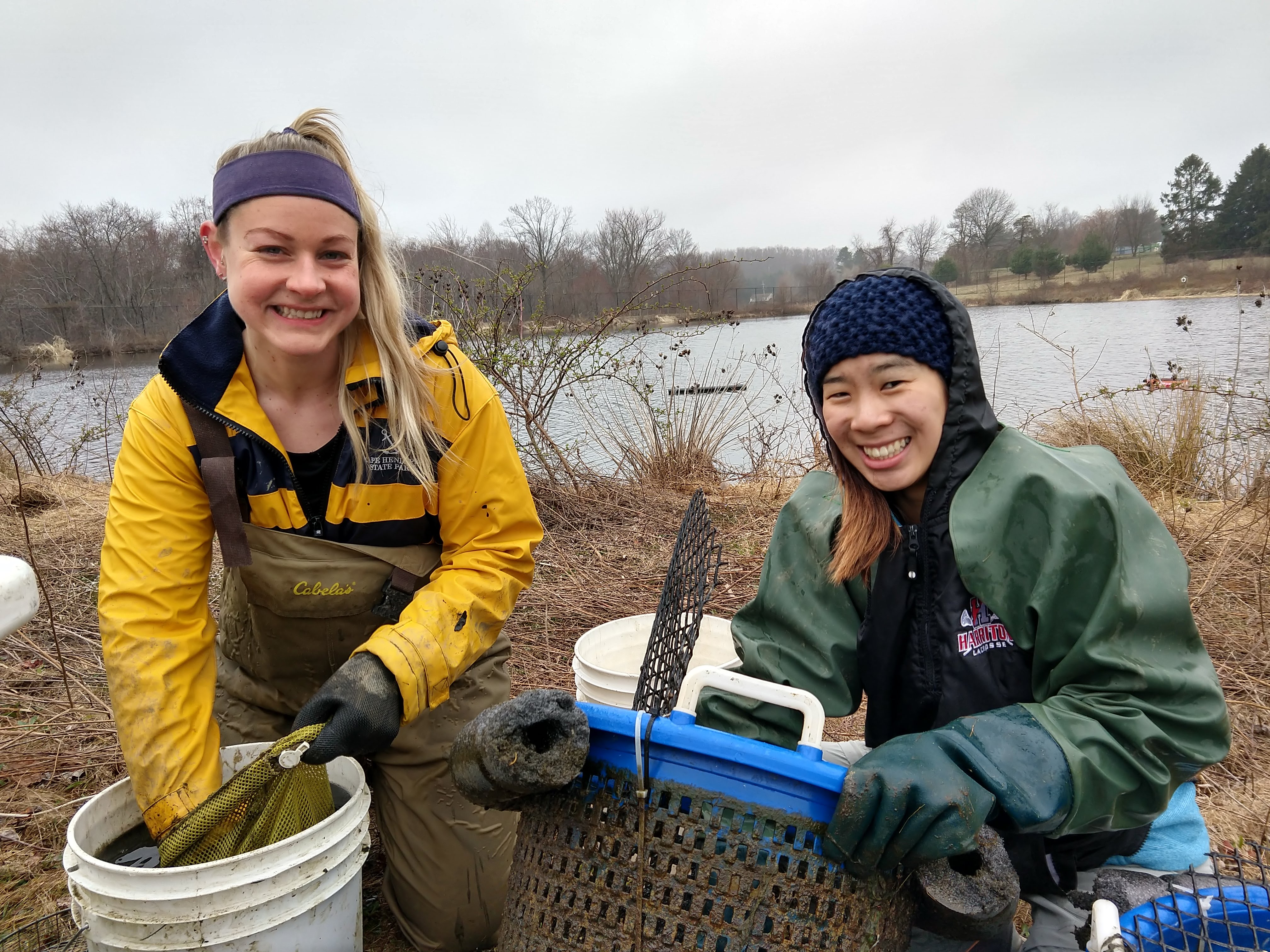 Freshwater mussel population growth is complex since mussels can only reproduce when certain fish are nearby. Mussel reproduction is also very uncertain and the chance of successful reproduction is directly related to the amount of both fish hosts and mussels. Therefore, mussel populations are very slow to rebound after disturbances that could kill mussels (e.g. spills, draining ponds, and in-stream construction). With few fish or mussels present, it could take decades or longer for a healthy mussel bed to form.
Restoration of mussel beds may take many forms and is seen as a tool that may be useful under certain conditions. One way to expedite mussel bed restoration is by reintroducing mussels to areas where they were once abundant. This may be achieved by translocating healthy adults from a nearby population and/or by seeding areas with juvenile mussels produced from a hatchery using local adult mussels (see Propagation). PDE scientists have focused on reintroducing small numbers of mussels to “test the waters” for mussels. Areas where mussels can survive and grow are considered good restoration sites. Determining where mussels do best is a key step in mussel restoration!

To expand where freshwater mussels may thrive, waterways previously impacted by industrial activities may need to be remediated. Freshwater mussels serve as excellent targets to remediate for due to their sensitivities to many stressors. Whereas other organisms may be able to persist through partial remediation (potentially keeping harmful pollutants present in aquatic environments), mussels may drive comprehensive action for the betterment of the plants, animals, and humans who depend on such natural resources. 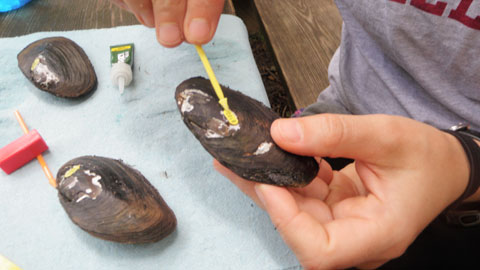 Reintroducing mussels to areas where they once thrived can be achieved with juvenile mussels from a hatchery (see #4 below), or by transplanting healthy adults. Many streams once contained mussels, but past disturbance wiped them out or dams blocked their fish hosts. Streams which could support mussels once again might need a little help to get going. This is where PDE and our partners assist by reintroducing baby mussels or adult mussels collected from healthy populations.

Since 2011, PDE scientists have successfully reintroduced mussels from healthy populations witin the Delaware River Basin to nearly one dozen streams and ponds that are being assessed for their ability to support mussels. Fixed with electronic tags, these mussels are periodically monitored to determine if they remain in the reintroduction area. Additionally, scientisits measure shell lengths of mussels to find out how well the mussels grow in different waterways! 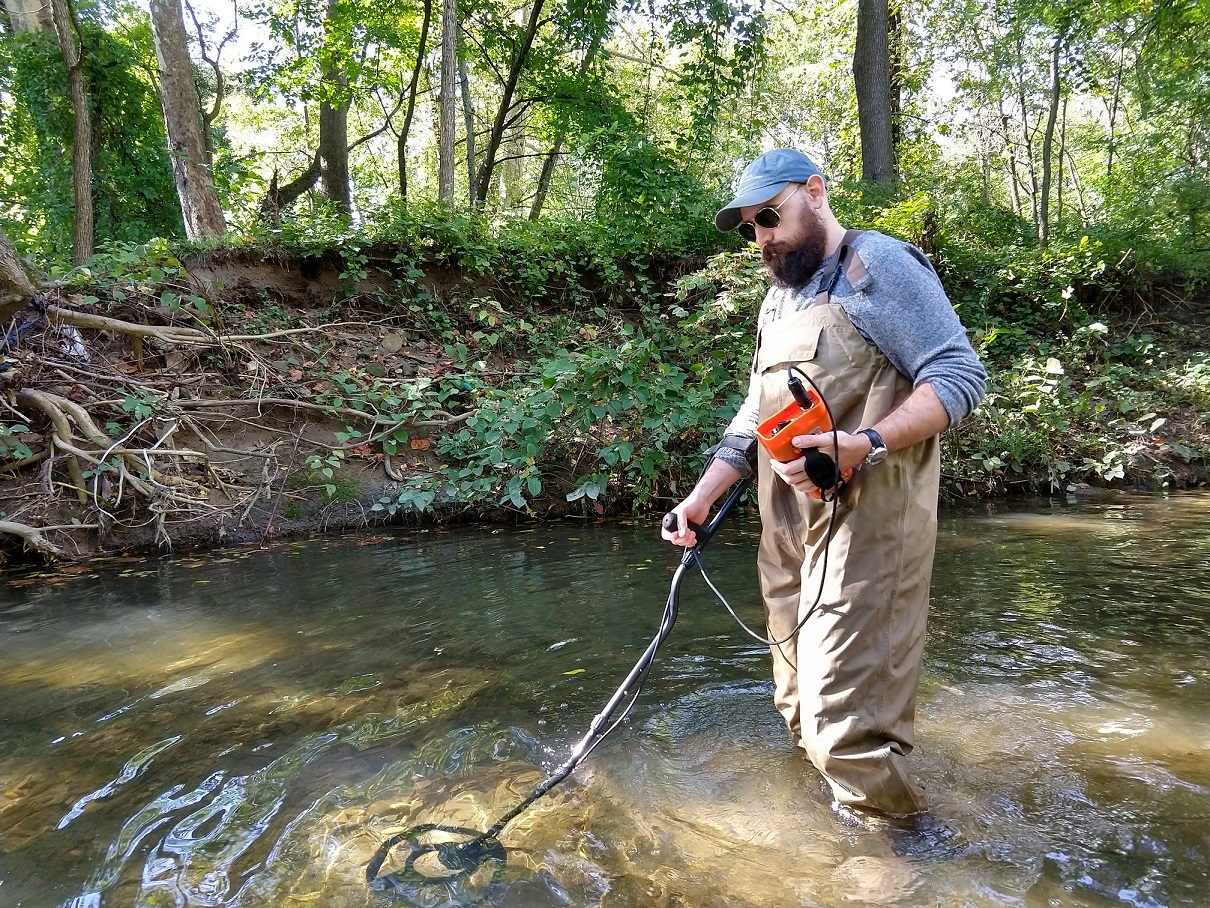 Currently, there are important data that we need to gather which will help advance mussel recovery efforts and enhance our ability to link restoration to measurable outcomes and goals of managers. A better understanding is needed for the life history, physiological ecology, and carrying capacity for our local mussel species. Life history information includes knowledge of suitable fish hosts to support mussel reproduction and link to fish passage and management concerns. Physiological data are needed to understand their individual metabolic and nutritional demands and develop predictive models of ecosystem services including water quality uplift. Population- and ecosystem-level studies are needed to develop predictive models of maximal current and future sustainable densities (i.e., how many mussels can a stream support?) Monitoring of previous restoration activities will be required to assess outcomes and facilitate adaptive management of mussel restoration in the Delaware Estuary. 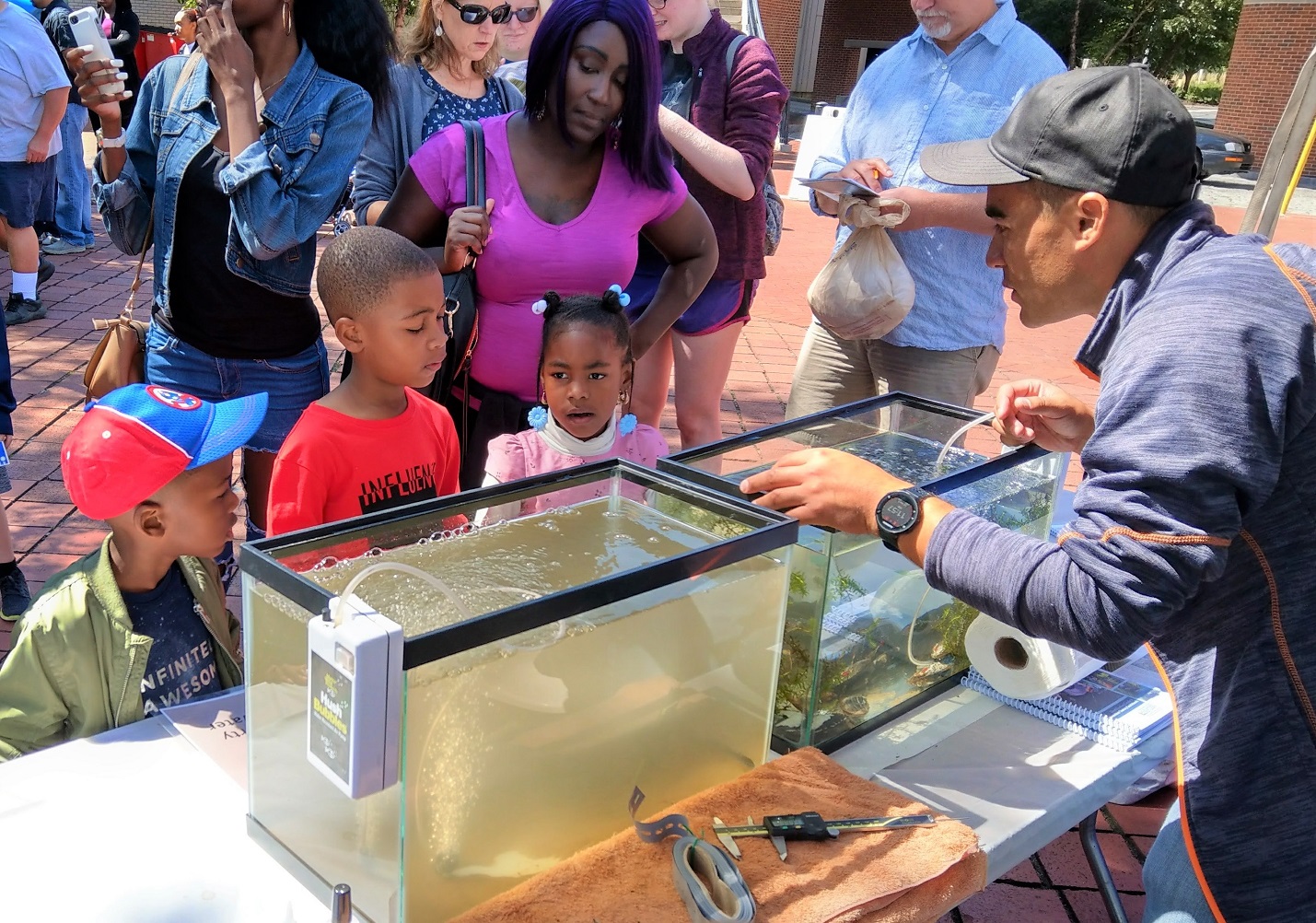 As a tri-state National Estuary Program, PDE has been working to launch and coordinate freshwater mussel restoration among diverse sectors within the Delaware Estuary watershed. PDE intends to soon form a technical advisory workgroup affiliated with the Science and Technical Advisory Committee to bring together and expand participation and provide technical peer review for freshwater mussel restoration. Formation of this group will also facilitate interstate cooperation and link to national conservation priorities.

As a science-based organization, PDE acknowledges that scientific research is critically important and must be properly disseminated to diverse audiences from technical groups to the general public. PDE focuses on clear translations of freshwater mussel research to share discoveries and educate others on how to assist and involve their own communities. Building the foundation for freshwater mussel interest and awareness increases our ability to understand and improve our environments together.